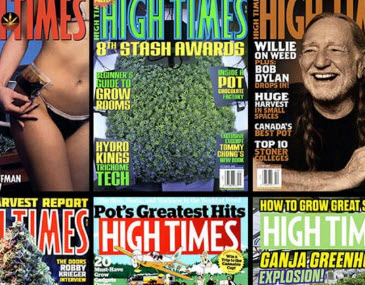 With such intense attention on the cannabis sector over the last few months, it should come as no surprise that the industry’s mascot, and perhaps its heart and soul, is looking to cash in as well. High Times, the iconic magazine and media property is looking to go public.

The actual entity in question here is High Times Holding Co., which was formerly known as Trans-High Corporation and changed its name to High Times Holding Co. in June, 2017. You probably know it as ‘that marijuana magazine’. The company has actually been around for nearly 45 years. And it’s apparently high time for a move onto the public markets.

Going to the Show

After filing for an IPO in January of this year, those plans were put on hold when it looked like prospects for raising enough in the deal soured. However, in June, the company announced it would be “launching an equity crowdfunding campaign ahead of its application for an initial public offering on Nasdaq later this year.”

Adam Levin, Chief Executive Officer of High Times said, “The campaign is intended to bolster the valuation of High Times Holding Corp while offering non-institutional investors greater access to shares than they would have in an IPO.”

For the offering, High Times set a price of $11 per share, 10% below the price the company expects the shares to trade on Nasdaq.

The company recently acknowledged that it would have to raise at least $14.7 million from the offering to live up to the Nasdaq’s stringent listing standards. They already have about $12.5 million committed from more than 9,000 investors.

Initially, in order to help open the spigots, the company suggested it would accept investments in Bitcoin. However, that plan was changed – without clear explanation. At this point, High Times will take fiat only, but through any means possible (checks, credit cards, ACH or wire transfers), as it strives to raise funds for subscription to is Reg-A+ share offering.

So, what do they need to get to the magic number? Remember, the parent company has a troubled balance sheet, with lots of debt on hand. So far, over half of its raised funds have gone to pay off creditors.

The answer is: more media exposure – it boils down to “Buzz”.

How to Get High

To get that done, the company recently entered into a “no cash” deal with iHeartMedia Inc (OTCMKTS:IHRTQ), a diversified media and entertainment company with a broad mainstream reach. According to the Wall Street Journal, iHeartMedia Inc “will trade up to $10 million worth of advertising inventory for a roughly 5% stake in the publisher of High Times, the 44-year-old marijuana magazine, offering the biggest U.S. radio broadcaster access to the nation’s growing number of cannabis consumers.”

“Cannabis at the end of the day is mainstream,” said High Times Chief Executive Adam Levin. “And iHeart has a huge mainstream appeal.”

In other words, Levin sees this as the deal that can take the High Times investment opportunity to the masses in a big enough way to generate what amounts to a rescue bid for ownership that is big enough to get the company public through the Reg A+ route and in position to meet Nasdaq listing criteria.

Given the buzz right now in front of the full legalization of the Adult-Use market in Canada expected to take effect later this month, and the $5 million to $10 million of ad inventory committed from iHeart, this is the right time to try this unique strategy.

What investors will be left with over the longer term is another question altogether.

*Past performance is not a predictor of future results. All investing involves risk of loss and individual investments may vary. The examples provided may not be representative of typical results. Your capital is at risk when you invest – you can lose some or all of your money. Never risk more than you can afford to lose.By submitting your information you agree to the terms of our Privacy Policy • Cancel Newsletter Any Time.This is a FREE service from Finacials Trend. Signing up for our FREE daily e-letter also entitles you to receive this report. We will NOT share your email address with anyone.
Related Topics:High TimesiHeartMedia Inc (OTCMKTS:IHRTQ)IPOReg-A+Reg-A+ share offering